You are here: Home / Reviews / David Icke Books: The Trap – A Review 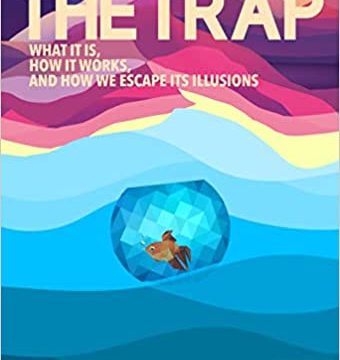 David Icke is a British writer, public speaker, and former professional footballer and sports broadcaster. He is the author of 23 books and has travelled to more than 60 countries giving lectures on his views about the secret agenda of the global elite.

Icke began his career in journalism as a sports commentator for the BBC. In 1990, he began to speak about what he believed were conspiracies by a global elite. He then became a full-time lecturer and author, writing about his theories on this and other related subjects.

What does the name David Icke mean to you? The chances are that your reaction will lean in one of two directions. Some tend towards mockery, criticism, suspicion, and even regard him as dangerous. Others see him as someone who communicates insights into the human condition and who has important messages and warning for the human race. He divides opinion and those who have heard of him are rarely sitting on the fence.

David Icke’s career as an author, speaker and broadcaster began after a short career in professional football and sports broadcasting. As a teenager, he played for Coventry and Hereford. As I wasn’t a sports fan during my teens and twenties, I didn’t pay much attention to the sports bulletins on Grandstand, so his appearance as a broadcaster didn’t register with me, let alone his time on the pitch.

My first memory of David Icke, like millions of others, was when he appeared on the Wogan Show to howls of derision and laughter, a memory that he recounts in his new book, The Trap. He goes on to explain a second interview with the late Sir Terry Wogan which was much more conciliatory.

During the 1990s I read some of his books, bought at Aristia Books in Albert Road, Southsea, and went to see him give a talk in the Assembly Rooms in the same suburb of Portsmouth. That was about 30 years ago so my memory of the event is a bit vague. I recall his earnest delivery and how he expanded on ideas that he had covered in his first books. I recall regarding those books as something positive and full of hope, but I lost sight of him as he went further and further into the labyrinth during the years that followed.

What it is, how is works, and how we escape its illusions (paperback, September 2022).

The Trap is the ‘Rosetta Stone’ of illusory reality and opens the door to freedom in its greatest sense.

Read this book and the ‘world’ will never look the same again. The veil of illusion shall be swept aside and the amazing truth this has kept from us shall set you free.

Three decades later, with the impact of the restrictions placed upon us during the Covid 19 pandemic, several new and ongoing wars, economic collapse, and the so-called climate crisis, it seems David Icke is being vindicated at last. Some of his predictions have proved to be accurate, even if they seemed bizarre and incredible when they first appeared in print.

People who previously laughed at him are now listening to what he has to say. That doesn’t mean that they instantly agree with everything he says but they are seeking answers and wonder if he might be able to provide some after all. They instinctively feel that they’re not only being kept in the dark, manipulated, lied to, and exploited by forces that have been working behind the scenes all along.

People who hold a different opinion and who offer evidence to back up their assertions have been censored in the press, cancelled professionally and personally, and de-platformed from social media under the excuse that they are spreading ‘misinformation‘, an Orwellian word used to describe any information that contradicts the narrative.

I listened to Icke’s narration of his new autobiographical book. The first two chapters are fairly uncontroversial as they are an account of his upbringing, school years, and entry into football as a young teenager, with only hints of what is to come. Then we hear about his move into sports broadcasting with the eye on the prize of appearing on Grandstand. It’s an engaging account peppered with lessons learned along the way but before long we are introduced to the people and events that were the catalyst for what Icke became and what has been behind the past thirty years of writing and speaking.

The book then moves straight into descriptions of the control and agenda of a complex network of organisations and cabals that use banking, medicine, the media, and politics to control the world’s population and push it toward a monoculture ruled over by the globalist elite.

Conspiracy theories are often derided and dismissed by not only those who hold power and authority in our society but by the media and almost everyone else too. Whether it’s the notion that shadowy forces are secretly controlling the world, or that a certain political leader is in cahoots with a foreign enemy, these ideas are routinely labelled as “conspiracy theories” and dismissed without further consideration or debate.

The term is often used to belittle alternative viewpoints and to silence dissenters, thereby protecting the status quo and preserving the established power structures.

Labelling someone with the tag of ‘conspiracy theorist’ is a lazy way of dismissing them in the same way that any discussion about immigration controls can be silenced by using the terms xenophobic, or discussions about multiculturalism can be ended by using the term racist.

But why do so many people dismiss conspiracy theories so readily? Some claim that these theories are inherently implausible, relying on far-fetched notions that defy science and logic, connecting dots to create a picture that doesn’t exist. Others argue that conspiracies don’t exist in real life, since nobody could keep such vast secrets for any length of time.

These arguments may have some merit, but they overlook the fact that power dynamics themselves are often conspiratorial, driven by networks of intimate agreements and secret arrangements. Regardless of whether individual conspiracy theories can be proven or disproven, therefore, it is important to acknowledge their underlying role in shaping our societies. By silencing debate around controversial topics like conspiracy theories, we only serve to reinforce existing inequalities and unjust power structures.

Thus instead of dismissing ideas out of hand as “conspiracy theories”, we should take the time to understand them on their own terms and carefully evaluate their merits. Only by fostering an open and honest dialogue about these important issues can we hope to move towards a more just society for all.

The media and the so-called fact-checkers will tell you that examples of disinformation include conspiracy theories, fake news stories, propaganda, and other overtly false statements that are designed to manipulate public opinion or interfere with political processes. In contrast, examples of misinformation might include Wikipedia inaccuracies, outdated statistics, errors in journalism, erroneous data, and other inadvertent mistakes.

One of the main criticisms used to justify banning David Icke from speaking at events and censoring him on mainstream media is the accusation that he’s anti-semitic. The accusation has also been directed at the author, feminist, and activist Alice Walker, who chose one of Icke’s books, Human Race, Get Off Your Knees, during her appearance on Desert Island Disks in May 2013.

The accusations against Alice Walker have been dissected by Chris Hedges in this article published in April 2022. It speaks for itself so you’ll have to read it in full and the comments beneath to make up your mind. A few days later, Hedges also published another article, this time about the accusations levelled at David Icke. Again, read it for yourself.

Icke has written extensively on a wide range of topics ranging from secret rulers to extra-terrestrial influences, but some of his most well-known theories revolve around manipulation by powerful elite groups.

For example, he suggests that there is a shadowy group that controls world events from behind the scenes. He also claims that this group conspires with extraterrestrials or other supernatural beings, using their advanced technology and knowledge to further their agenda.

Whether it’s out of genuine interest in uncovering the truth behind these ideas or just our innate fascination with all things strange and mysterious, there is no denying that conspiracy theories will always hold an appeal for many people. After all, when it comes to humanity’s place in the universe and its understanding of reality, sometimes what we don’t know is more than enough.

So while most conspiracy theorists get laughed off as paranoid figures or tin foil hat nuts, it can’t be denied that their ideas often have a powerful resonance with those seeking an alternative truth about our complex world. In short, no matter what your opinion on conspiracy theories might be, chances are you probably can’t help but at least be curious about them every once in a while! And maybe there’s something we can all learn from that curiosity: in an increasingly uncertain world and political climate, maybe looking beyond conventional explanations for today’s complex problems isn’t such a bad idea after all.

Whatever your personal beliefs might be about these types of ideas, there’s no doubt that they continue to fascinate us all – even if they do sound like something straight out of science fiction. Either way, one thing is certain: as long as humans remain curious creatures who want answers to life’s biggest questions and mysteries, conspiracy theories will always be right up there among them.

What it is, how is works, and how we escape its illusions (paperback, September 2022).

The Trap is the ‘Rosetta Stone’ of illusory reality and opens the door to freedom in its greatest sense.

Read this book and the ‘world’ will never look the same again. The veil of illusion shall be swept aside and the amazing truth this has kept from us shall set you free.