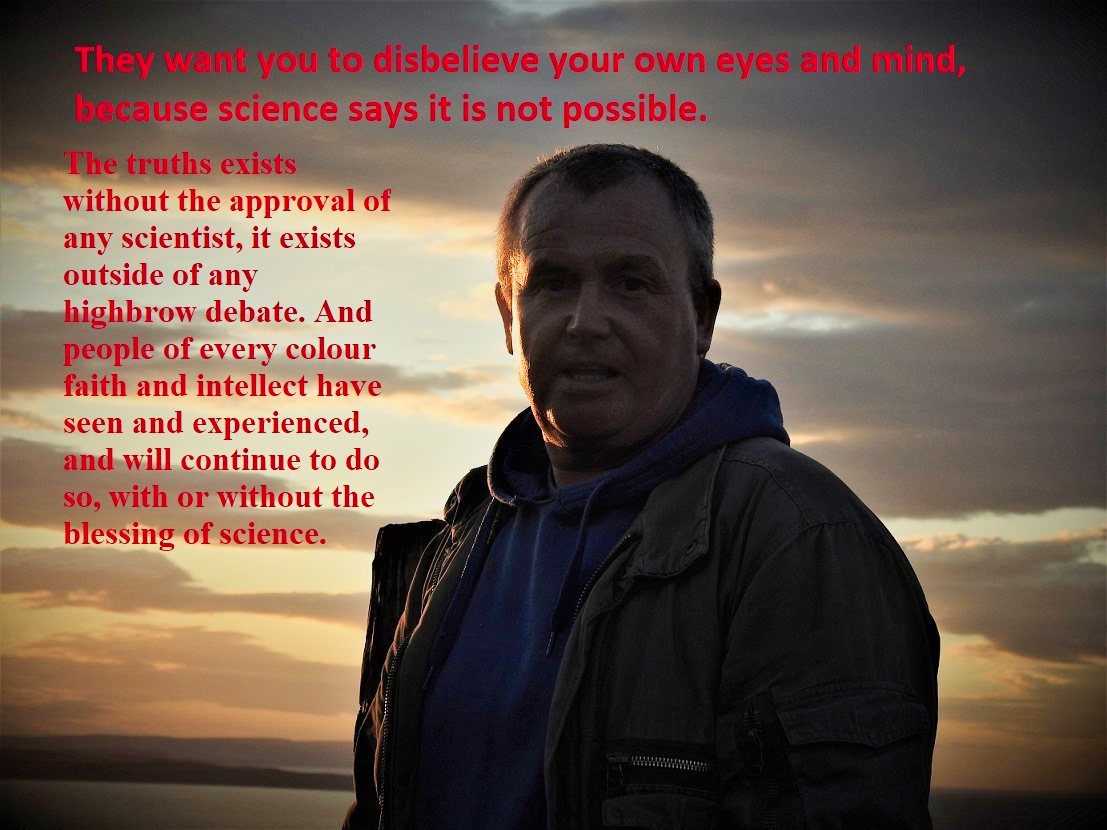 Paul Sinclair is a writer and researcher from the small fishing town of Bridlington in the United Kingdom. He is the author of the Truth Proof books and has recently published his fourth book, Truth Proof 4: Beyond Reasonable Doubt. He has been married to his wife Mary for 35 years and they have four grown up children. Paul describes himself as a full time researcher of all things unexplained.

Through no choice of his own, he has been involved in unexplained phenomena from as long as he can remember.  Now aged 56, Paul devotes almost every day to his research, a job he openly admits gives little back for all of his efforts. However, due to his own life long experiences he continues to search for answers to a truth that leaves no proof.

Paul would describe his part in this as an unwilling participant, and does not need to be convinced that beings from another sphere of existence are real. He has experienced the terrifying truth, and has the scars to prove it. Whitey Strieber said of Paul that he does not know anyone in the world who has been affected by the visitors. From 2002 onwards, his research into the ILFs (Intelligent light-forms) consumed a large part of his life. He spent many years alone in remote locations trying to obtain proof of their existence.

The first three books have received high praise from many notable people within the field.  Due in part to his honest approach and unrelenting pursuit for answers; answers he openly admits may never come in his lifetime. Despite a lifetime of interaction, Paul never spoke openly about his own life long experiences with what he calls the night people until 2015. That was when he first began to tell his own story during a radio interview with Whitley Strieber.

It was not planned; they were supposed to be talking about his new book. It just happened; he described the interview as if a cork had blown off a bottle. In many ways it was a relief and explained why he was so deeply involved in the subject.

Mysterious and provocative stories about what could be the most magical corner of the magical British Isles. Paul Sinclair walks many a dark and misty path in his ongoing effort to discover and understand. I urge you to pick up Truth Proof 4. You will not put it down until you read the last, delicious word. And then you will ask yourself, “when will there be more?” A wonderful combination of delight and wisdom.

I’ve known Paul since he started his researches… He did his first audio interview with me. In my radio lifetime I’ve spoken with hundreds of authors and researchers… And I know Paul to be honest, diligent, hugely committed and hardworking — He writes compellingly, three-dimensionally and from the heart. “Truth Proof 4” is the latest in an excellent line – another “must read”.

Howard Hughes: Broadcaster, journalist and presenter of “The Unexplained” podcast

The latest in this ever-growing series of Truth Proof books features UFOs, cryptids and other high strangeness, resulting in a fascinating blend of paranormal phenomena, with more than a dash of the dark side. The mix of fascinating cases and insightful analysis makes for a book that will generate a lot of interest, discussion and debate.

Sinclair enters the complex and controversial world of high strangeness and gathers vast information to affirm this and show the happenings are real. He has spent much feet on the ground time gathering witness accounts. A book of real people and real experiences that you can’t put down.

This is the fourth book by Paul Sinclair, but the first one specifically autobiographical. Tracing his boyhood in rural Yorkshire in the sixties and seventies he gives well observed insights into village life which unfold into his being beset by the paranormal. Paul relates how his life was repeatedly visited by various phenomena and the ensuing loneliness which changed his own and his family’s lives for ever. While he conveys a remarkable objectivity and acceptance he documents his progress from victim to established authority and researcher in the field of UFOs, cryptids, apparitions and poltergeists. The author stoically resists the temptation to feel malice or explain and categorise his experiences; he does however convey powerfully to the reader the emotional impact they have had on his life. Not a book perhaps for the solitary reader on a stormy night. Unquestionably a touchstone and comfort for those who have suffered similarly, which will also stir the imaginations of those who have not.

Truth Proof 3: Bringing Down The Light

Truth Proof 3, Bringing Down The Light, is not only about my work as a researcher, it is about everyone who has shared their experiences with me – experiences that are often deeply personal and sometimes disturbing. I uncovered the latest of these amazing stories in 2018…and together they read like some disjointed ‘carnival of the strange’. There were lights under the sea, mutilated animal carcasses, visits from men in black and even more intelligent lightforms seen over land and sea – and as yet, I knew very little about the body found in November 2017 or what kind of animal had been watching us in the darkness at Bempton Cliffs.

“This new book will leave the reader in wonderment.” ~ Chris Evers
“You will not be disappointed…” ~ Steve Mera
“A most worthy follow-up to his first book.” ~ Peter Robbins international lecturer.
“A joy to read!” ~ Whitley Strieber
“A fascinating and disturbing collection of accounts…” ~ Nick Pope
“Refreshingly ‘first-hand’…and compelling.” ~ Howard Hughes
“I was impressed at the standard of investigation.” ~ Charles Halt

The coastal area around Bridlington has a deep history of folklore, strange sightings and mysterious disappearances and Paul is in the middle of it all. Published in 2016, Paul’s first book entitled Truth-Proof, is a collection of first-hand accounts and recollections of local UFO activity, missing people, alien big cats, missing aircraft and other anomalous phenomena. Paul is the most thorough investigator, who is not content with hearsay or rumours. He studies and researches his subjects to the minutest detail, looking for documented evidence that backs up everything in Truth-Proof.